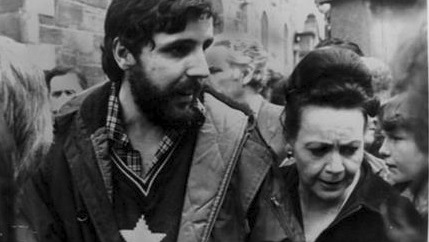 Shots have been fired over the coffin of Peggy O’Hara, the mother of INLA hunger striker, Patsy O’Hara.

A masked gunman, armed with a rifle, emerged from a group of mourners outside her home at Templegrove in the Buncrana Road area of Londonderry yesterday evening, firing several shots in the air at around 8pm.

Video appeared on YouTube of the shots being fired as onlookers – including Derry and Strabane Independent Councillor Gary Donnelly – clapped their approval.

A party of masked men and women accompanied Mrs O’Hara’s hearse as it made its way to Bradley’s Funeral Parlour in William Street in the city centre.

The 84-year-old’s funeral is to take place on Saturday morning.

Among those who have paid tribute to her are Sinn Fein president Gerry Adams and Deputy First Minister Martin McGuinness.

Mr McGuinness said: “I was saddened to hear of the death this morning of Peggy O’Hara, mother of hunger striker, Patsy.

“Peggy, along with the parents and families of the other Long Kesh martyrs, suffered long agonising days of torment as they watched their sons die in order that their comrades would be treated as political prisoners.

“Peggy watched for 61 days as Patsy’s life slowly ebbed away and showed tremendous courage by acting in accordance with his wishes.”

He added: “The death of Peggy O’Hara will be received with sadness by all who knew her and within the wider republican family.”

Mrs O’Hara was an unsuccessful candidate in the 2007 Assembly elections.

Describing the shooting incident as a disgrace, Foyle DUP MLA Gary Middleton called on the PSNI to take urgent action.

He said: “It’s a disgrace that this outrage should have been permitted to take place. I want the police to take action as a matter of urgency.

“I am sure that there are many people in the area who would not be at all happy at this terrorist display involving the firing of weapons close to their homes.”

An Irish Republican Socialist Party spokesperson said: “Peggy O’Hara was a true inspiration and an icon of the strength of the calibre of women within the struggle. She stood by Patsy’s side and by his ideals until her last moment.”

Patsy O’Hara died in the Maze Prison in 1981 after 61 days on hunger strike.

He was in prison following his conviction for possession of a hand grenade.