TOUR OF THE NORTH SENZA INCIDENTI 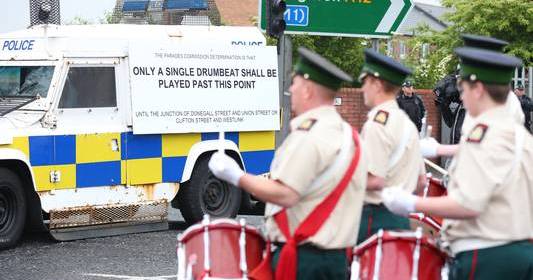 Tour of the North parade passes off peacefully (Belfast Telegraph)

The first major parade of this year’s marching season passed off peacefully on Friday evening.

The annual Tour of the North parade of 13 bands and hundreds of marchers made its way through parts of north Belfast via the city centre.

The parade’s route took it from Denmark Street to Hopefield Street via the city centre and Twaddell Avenue.

Despite scenes of violence in the past and controversy around the playing of sectarian songs outside a Roman Catholic church, the were no incidents of note during the 2015 march.

Bands stuck to playing a single drumbeat as they passed St Patrick’s Church on Donegall Street.

A planned protest by Carrick Hill residents was called off ahead of the parade.

The Orange Order had just hours earlier lost a High Court bid to overturn conditions imposed on the parade by the Parades Commission.

Under the conditions bands were not allowed to play songs within earshot of St Patrick’s Church on Donegall Street.

“I welcome the fact that tonight’s Tour of the North has passed off peacefully and that the Parades Commission determination was respected,” he said.

“I would like to thank the Carrickhill residents for their mature attitude and their decision not to protest tonight.”

He added: “I am convinced that the only way to resolve issues around parading is through genuine and inclusive dialogue with local communities.”

“We thank our supporters and look forward to celebrating our culture and heritage in a traditional manner.”

Their spokesman added that although Carrick Hill residents called off their protest, it was noted that large numbers still turned out to observe the parade.

The PSNI’s Belfast city district commander Chief Superintendent Nigel Grimshaw said: “The aim of this evening’s police operation was to ensure the safety of everyone involved.

“We had a significant operation in place tonight and I am very pleased with how the parade has passed. I was encouraged by the manner in which all those present tonight conducted themselves and appreciate the efforts those involved went to in ensuring this was the case.”

He added: “The efforts made by community representatives and event organisers showed a real willingness to ensure the event pass off peacefully. This will create a positive platform for dealing with sensitive parades throughout the coming months.”