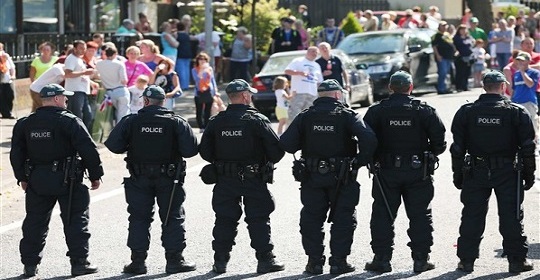 Thousands of demonstrators gathered at police lines in north Belfast on Saturday in support of an Orange Order parade which passed off without major incident.

Order members were being prevented from walking past the Ardoyne shopfronts, on the Crumlin Road, in accordance with a Parades Commission ruling.

A heavy PSNI security operation was in place in the Woodvale Road area for the parade.

The Order has said it wants to complete the return parade they were banned from making on the Twelfth of July.

Other restrictions were put on the march by the parades watchdog.

Only three bands were allowed to take part in the event which began at Brookmount Street, before making its way along the Shankill Road. No undue stoppages or delays were permitted during the parade.

In the vicinity of interface areas, the parades watchdog ruled that there shall be “no singing, chanting or loud drumming” and marching should be dignified.

Any violence does our cause harm. We will get rid of the Parades Commission but we will do it by peaceful protest and politics.

Mervyn Gibson, Orange Order
Addressing the crowd from the top of a van, Michael Crosby, from Pride of Ardoyne Flute Band, called for loyalists across Northern Ireland to show their support.

He said: “This is only the start of it. It will continue. We want to fill this place with thousands of people and as for our unionist politicians – our aim is to get the Parades Commission gone.”

Demonstrators dispersed by 4.30pm as per the Parades Commission ruling following a rendition of ‘God Save The Queen.’ A police spokesperson said that Woodvale Road has reopened.

“The police response was excellent today,” he said. “We had sensible policing – sadly we don’t always see that.”

Mr Gibson added: “I think it was a good day for peaceful protest. This crisis has been brought upon us by the Parades Commission – one peaceful protest is not going to solve it.

“We need people to become involved in politics and we need peaceful protest to try and sort this mess out.

“But, the day so far has been peaceful and long may it continue.”

On the Twelfth of July, police lines came under sustained attack as officers blocked Orangemen from marching past the nationalist Ardoyne district, as determined by the Parades Commission.

To date, 78 people have been arrested over rioting related to the parades dispute.

Seventy-one police officers – 68 from the PSNI and three drafted in from Great Britain – have been injured.

“It is my hope that all sides will now be able to resume talks in order to find a lasting solution to this contentious parade. I would urge all political, religious, community representatives to do all that they can to facilitate this dialogue, he added.

“The commencement of the Haass talks affords a real opportunity for leadership to be shown to ensure that local families do not continue to be affected by the type of violence we have seen recently.”

Prior to the parade, Loyalist community worker Jim Wilson appealed for a peaceful protest.

“And they need to protest in the way that the Unionist and Protestant and Loyalist community would like them to.”

He said that the community felt “so sore and bad” about what was happening – but violence was taking away from the message.

On Friday, the County Grand Master of Belfast George Chittick said they would protest when stopped on the Woodvale Road, but the demonstration “must be peaceful”.

Leaflets were handed out by marshalls to supporters of the Orange lodges and bands involved, making clear the conditions of the protest.

“The only way the Orange family will achieve their objectives; to see the Ligoniel lodges home and the Parades Commission disbanded, is by peaceful means, anyone who is coming to the Parade must be committed to protesting peacefully and dispersing when asked to do so,” Mr Chittick said.