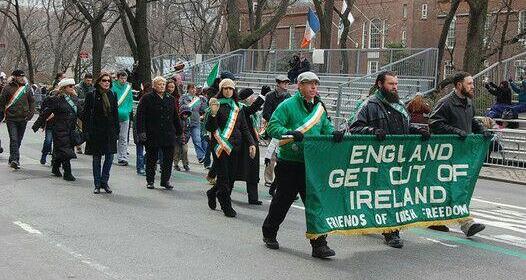 The PSNI will not be taking part in the St Patrick’s Day parade in New York this year, it has been confirmed.

Concerns were raised last year about the six PSNI officers’ official presence among explicitly Irish republican banners in the 2014 event.

The PSNI was taking part for the the first time.

Unionists complained that those taking part had to walk behind banners which read “England get out of Ireland” and also numerous Irish Tricolours.

There had been fears that the PSNI’s participation would spark angry clashes – but the march passed off peacefully with a small number of protestors in attendance.

In a letter to the Chief Constable Matt Baggott last year, the TUV leader Jim Allister said the only flag which could be displayed in the parade, other than the Stars and Stripes, was the Irish Tricolour – and that the official rules required each unit on parade to display it. Plus, the only banners permitted – other than those identifying the unit on parade – had to read, ‘England Get out of Ireland’.

This year, Mr Allister welcomed confirmation that the PSNI will not be attending.

“Before Christmas I wrote to the PSNI again pointing out that Martin Galvin, the former head of the Irish Northern Aid (NORAID) which funded the IRA, and a hardline republican, has been named an aide to Grand Marshal Cardinal Timothy Dolan for the New York St Patrick’s Day parade in 2015,” he said.

“Martin Galvin was once on the run from police officers in Northern Ireland and I wrote to request an assurance that we would not be in the ridiculous position that the PSNI will be lining up to march behind him at this year’s St Patrick’s Day parade in New York.

“I welcome the fact that the PSNI have now assured me that they have not been invited to this year’s event.

As that is the case, no PSNI officer who attends can wear their uniform, he added.

Superintendent Sam Donaldson said: “We can confirm that there will be no PSNI officers attending the 2015 New York St Patrick’s Day parade in an official capacity.”