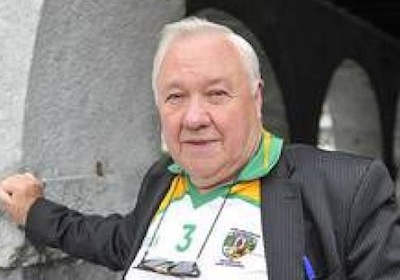 In the broad sweep of history the names of generals and scoundrels are often recalled over the names of those who actually made the history.  The tactical commander is often elbowed out of the picture by the greater glory of a great leader who acted on the strategic level.

Paddy Joe Rice is a giant of Irish republican history and the I.R.A.  When Belfast erupted in flames in 1969 Paddy Joe Rice, along with Brendan and Charlie Hughes and other courageous men and women stepped forth into the breach and took up arms against the onslaught being unleashed against the catholic community and gave birth to those we  affectionately recall as “The Dogs”: D-Company, 2nd Battalion, Belfast Brigade, Irish Republican Army.  Fighting men and women of the highest calibre who stood against the might of a British Army who thought they would come here and crush the Irish rebellion in a few short weeks with their colonial strategy of the mailed fist of repression and fostering of sectarian animosities.

Paddy Joe Rice was proud of his rebel past but he wasn’t a man to live in and repeat the past.  He was as aware of the mistakes of the past as he was of the victories and he always sought to steer republicans away from the pitfalls of sectarianism which the British fomented from their arrival here in 1969.  When the British MRF was machine-gunning catholic civilians from unmarked cars in drive-by shootings in the early 1970s many republicans made the false assumption that it was the Unionists and set off on revenge missions to shoot up bars or clubs on the Shankill, Village or wherever.  Then the UVF or UDA retaliated and the cycle of sectarian self-destruction was ignited.

Paddy Joe Rice recognised the malicious and destructive influence British policy played here in inciting sectarianism between the Irish working class and he equally recognised the malicious and destructive influence of careerist politicians upon a noble struggle for freedom.  Men like Paddy Joe Rice didn’t take up arms for a resurrected Stormont or British Tory imposed cuts upon our living standards, he fought for freedom and the right of Ireland to stand as an independent Republic in the fraternity of nations.  He fought for the people of the Lower Falls against the British and he remained a principled and dedicated republican to his death.

In the weeks before his death the British police in Ireland arrested him for questioning about Jean Mc Conville – even though they knew Paddy Joe was in Long Kesh when that shameful blot on our collective, republican responsibility occurred.  His arrest was more to do with the vengeance of a British state which could not break Paddy Joe Rice throughout his entire life of commitment to the Irish republic than it was to do with delivering some sense of justice or closure to the Mc Conville family.  To his death he was hounded by the British, to his death he was an unrepentant Fenian.

We lay Paddy Joe Rice’s soul to rest today.  He had a hard time towards the end but never complained.  To the end Paddy Joe Rice was active in promoting the republican message and encouraging the continuation of our faith.  He loved his family, he loved his wife Sadie who was always there to care for him and he loved his people.  We salute his courage in life and will remember him in death.