Posted on 18 Ago 2014 by Sara Parmigiani Lascia un commento 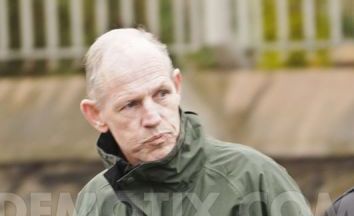 People assembled at the graveside of Tony Catney hardly need an introduction to the life and times of the man being laid to rest. There are so many dimensions to the life just ended that it would be impossible to catalogue them or squeeze them into some easy to deliver package. TC, as we all knew him, was a republican gem, a rough diamond with sharp edges and a razor sharp intellect to match.

People will remember TC in different ways and for different reasons. His friends will remember him fondly. His critics will see him more caustically. But the mischief in him would have enjoyed that. His attitude would be that if he was not annoying those he fundamentally disagreed with then he wasn’t doing his job. And the job of TC, as he saw it, was to bring clarity to matters that others tried to obscure.

For IRA prisoners TC will always occupy a central place in our minds. For a decade and a half he was one of us. His imprisonment had taken him through the North’s jails: Crumlin Road, Magilligan, the Cages of Long Kesh and then the H Blocks. Not content with just those four he managed to get himself into Maghaberry here for refusing to pay a fine, courtesy of a protest he had been involved in. This was shortly before he was diagnosed with the illness which eventually snatched him away from us all. When he left the prison it never left him. There is something poignant and hugely symbolic that TC should have died on the 9th of August, a day so central in the republican cultural memory, and which is steeped in imagery of the prisoner.

His experience of prison and its related issues were vast and he put them to good use. Shortly before his illness seized him from our midst he could be found in the visiting room of this very jail, attending to his friends. Today as he is laid to rest we seize him back and acknowledge his rightful place as a stalwart amongst, and great friend of, IRA prisoners.

When he was released after serving a life sentence for IRA activity TC took over the POW Department, working tirelessly to ensure that prisoners had the best possible conditions under the circumstances that prevailed. He also did his utmost to facilitate their integration back into all areas of the movement and their communities when they were released. He battled against the bureaucracies every time and everywhere their dead hand appeared trying to suffocate initiative or strangle different ideas.

Despite his serious misgivings about the direction that Sinn Fein was heading he remained within the party and the army, at all times trying to influence. He could wax critical of others who had left the movement before the possibilities for halting what he felt was the emasculation of republicanism were exhausted. But he never alienated them. While republicans were being marginalised for having spoken out against Sinn Fein policy he, at no small risk to himself, could be found engaging with those people, debating, assisting them and protecting them from the wrath of former colleagues.

After the first ceasefire 20 years ago this very month he was central to the formation of the short lived Bobby Sands Discussion Group which promoted ideas and valued critique and open discussion. He worked incessantly at improving Sinn Fein’s electoral fortunes, serving at times as one of the party’s key election directors. While heavily involved in electioneering he probably subscribed to the view that if god wanted us to vote he would have given us candidates worth voting for. And when he left the Movement he redirected his energies to breathing life into the building of republican alternatives.

TC was what we sometimes call a political animal. Politics defined him. Throughout his day he was consumed with it, discussing it, strategizing. While slowly dying he still found the time to travel within Ireland to see friends and discuss strategy. His was a life of unrelenting political activism. He was vociferous in his anti-imperialist perspective. A socialist, he worked on behalf of his local community against whoever dried to dump deprivation on it.

Nothing was too challenging for him. His sense of devilment loved a good barney, never feeling that a different opinion was a tazer that should be avoided at all costs.

His ideas found him friends but also made him enemies. He was the victim of discrimination in employment; he found himself smeared and marginalised. The whispering campaigns were ratcheted up to curb his influence. Yet he was never afraid to step outside the loop. His openness to new ideas, his willingness to criticise the views of others in a robust but fair manner opened many doors. Adversaries within the loyalist community came to respect him. Former prison staff who engaged him began to recognise in his character a voice of enlightenment that sought to illuminate dark penal places where equally dark regimes prevailed.

No mindless militarist, he nevertheless as a revolutionary never relinquished his belief in the strategic utility of armed force intelligently applied. He knew injustice, and campaigned against police repression, feeling the state in the North could not be reformed but could be merely reshaped so that it could be better positioned to neutralise any challenge to the system it perpetuated. He was concerned about the raft of draconian legislation and often used the term Repressive State Apparatus to refer to law enforcement agencies. He saw how the Diplock Courts continued to function and he was at the forefront of campaigns on behalf of the victims of miscarriages of justice, some of whom remain in here.

He will be missed by all of us. There can be no pretending that the vacuum left by his passing will be easily filled. How many have that combination of energy, intellect, strategic awareness, vision and communicative ability?

We, the IRA prisoners in the cells of Maghaberry, have lost an esteemed friend, companion, comrade and colleague. On the night of his death a one minute silence was observed within these walls in memory of the man we cherished. When the cell doors bang shut behind us tonight and we are alone with our thoughts, he will take centre stage.