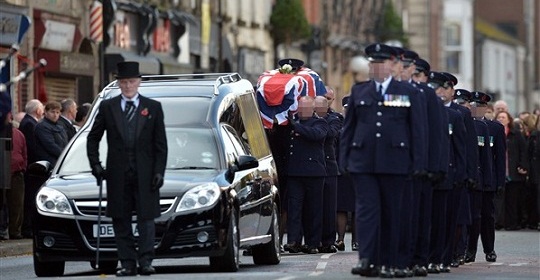 David Black, the prison officer who was murdered as he travelled to work last week, has been described as “a man committed to peace” at his funeral service.

The married father of two was shot when he was ambushed while driving on the M1 motorway on Thursday. Mr Black worked at Maghaberry prison, where republican inmates have been holding protests. He is the first NI prison officer to be murdered by paramilitaries in almost 20 years.

Shops closed and hundreds of people lined the streets as Cookstown came to a standstill on Tuesday, with former colleagues from the prison service and friends from the Orange Order among those who gathered to pay their respects at Mr Black’s funeral.

Reverend Tom Greer of Molesworth Presbyterian Church, where Mr Black attended regularly, said he was horrified at the brutality of his murder.

“It is so terrible that evil men with such hatred in their hearts should rob us of a great man like David with love and kindness in his heart,” he said.

David Black was a man of honour and principle, a man of kindness and generosity, a man committed to peace and prosperity in Northern Ireland – all those things completely the opposite of the murderous thugs and bloodthirsty criminals who took David’s life.

Rev Greer
Rev Greer said former prisoners had spoken of the impact that Mr Black had on their life.

“David viewed his work as something that was meant to improve society. He wanted those who came into prison to leave as changed men.”

A private service was held at Mr Black’s home, before the family made their way to the church, where his children Kyle and Kyra paid personal tribute to their 52-year-old father.

His teenage daughter read out a poem about her father describing his “big smile and chuckle” which brightened up her day.

The emotional tribute continued: “Our love will be everlasting, that will never ever change.

“But the one thing I want t you to know is that I’m so proud of you. You’re not just my daddy, but forever my special hero.”

Kyle said: “They can take daddy from us. They can deprive Kyra and me of a devoted father and mummy of a loving husband, but they can never take away the love that we have in our hearts and the memories that we will all cherish for the rest of our lives.

“Daddy may not be here in person but he will be here with us all in spirit.”

He continued: “Although daddy was small in stature he had had a large impact on the lives of everybody that knew him and he’s left a huge legacy – one that my mummy, Kyra and myself will be so, so proud to carry on.”

Deputy First Minister Martin McGuinness offered to go to the funeral, but it is believed the Black family asked him not to attend.

A number of other politicians were also at the funeral, as well as the PSNI Chief Constable and the Director General of the Northern Ireland Prison Service and his southern counterpart.

A kilt-wearing bagpiper playing a lament led six prison officers wearing immaculate navy blue suits and caps as they carried the remains of David Black, 52, military-style through the empty streets of Cookstown, Co Tyrone. Prison service hat and gloves and the union flag were carried on the coffin as lined officers formed a guard of honour.

Mr Black was shot at high speed on a motorway by suspected dissident republicans on Thursday as he drove to work at the high-security Maghaberry prison, Co Antrim.

The head of the Presbyterian Church, Dr Roy Patton, said it was an attack on the whole community.

“We are together in this, totally united as churches, politicians, civic society, ordinary men and women who feel for you today in your unspeakable loss, and who in the strongest possible terms are outraged by such an evil deed,” he said.

“This attack on a prison officer was an attack on this whole community.”

He said all those who served the community enjoyed total support.

“As a people we stand together as those who have chosen a different way than the way of violence, that we have no desire whatsoever to be dragged back into the darkness, that what you have brought about in the death of David Black is totally unacceptable as far as we are concerned as well as being totally wrong in the eyes of God,” he added.

Gunmen travelling in a stolen car fired on the victim’s Audi car near a junction leading to Portadown, Co Armagh, as he was on his way to Maghaberry. The car careered off the road and into a ditch.

Mr Black, who had more than 30 years’ service, was the first prison officer to die at the hands of paramilitaries since 1993.

Mr Black’s son Kyle, 21, told of his pride in his father and had a message for his killers.

“They can take daddy from us … they can deprive mummy of a loving husband, but they can never take away the love that we have in our hearts and the memories that we will all cherish for the rest of our lives.

“Daddy may not be here in person but he will be with us all in the future.

“Although daddy was small in stature, he has had a large impact on the lives of everybody that loved him and has left a huge legacy, one that my mummy, Kyra and myself will be so, so proud to carry on.”

He said they were all wearing poppies to symbolise his father because of the ultimate sacrifice he paid.

“Everybody that knew my daddy would agree that he was a true gentleman, always happy and a smile for everybody,” he said.

“What a role model he has been, with all the characteristics of the perfect daddy.”

He said his father was hardworking and provided everything for his family.

“He has left us with so many happy memories that we can look back on and reminisce in years to come,” he added.

He said all his friends agreed his father was true and loyal through thick and thin as well as down to earth and straight talking. He was fair and it did not matter what religion, race or background a person came from – he gave everybody a chance.

“Even the prisoners that dad cared for have shown their support. That shows the respect they had for my daddy and to me that speaks great volumes of the man that he was,” Kyle said.

“That wee man with the big smile and the even bigger heart has touched their lives, the men he worked with on a day-to-day basis.”

He said the family was were so proud of Mr Black’s honesty and principles.

At the same time as the funeral, a vigil organised by the Irish Congress of Trade Unions. was held in Belfast in memory of Mr Black.