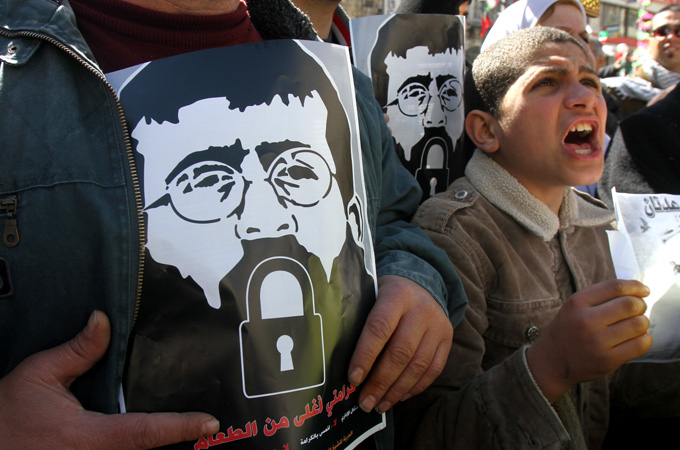 Khader Adnan recounts his 66-day fast in Israeli jail that has made him a symbol of Palestinian resistance.

When Palestinian hunger striker Khader Adnan called his mother at 11:30pm on Tuesday night, she burst into tears. “He told me, ‘Mother I am on my way home,'” she said. “For the first time in months my heart was at ease again.” For Palestinians, Khader Adnan has become a symbol of resistance and steadfastness, or sumoud, after he waged a 66-day hunger strike against the Israeli prison service. He began his hunger strike immediately after his violent arrest by Israeli soldiers on December 17, 2011. He was detained under what Israel calls “administrative detention”, a policy adopted from the era of the British mandate. Under administrative detention, Israel can detain a prisoner for up to six months, renewable indefinitely, without ever charging the prisoner or presenting any evidence against them.

There are currently more than 4,500 Palestinian prisoners in Israeli jails, over 300 of those, in administrative detention. Adnan’s hunger strike, which eventually attracted international media attention and solidarity from around the world, inspired other administrative detainees to go on hunger strike. Hana Shalabi went on strike for 43 days before she was released and deported from her village in the West Bank to Gaza. Five others are now in the Ramleh prison hospital, including Bilal Thiab and Thaer Halahleh, who have not eaten for 52 days. After more than two months without food, Adnan’s lawyer brokered a deal in February with Israeli officials that saw him released on April 17. Coincidentally, that is the same day Palestinians commemorate Prisoners Day, which was marked this year by the open-ended hunger strike of 1,600 prisoners.

Sahar Francis, director of the Ramallah-based rights group Addameer, saw Adnan’s hunger strike as a catalyst for this current mass hunger strike movement. “I definitely think the successful hunger strike of Khader Adnan and his release was a main feature in inspiring the 1,600 prisoners to carry out this act now, which is a continuation of what they began in September 2011,” he says. “It should be noted that a successful hunger strike depends a lot on internal support, international pressure from the EU and UN, and the policy of the Israeli prison authorities.”

Khader Adnan, who was was reunited with his family just before midnight on Tuesday, after visiting the families of the prisoners in Arrabeh, seven of whom are serving life sentences, later spoke to Al Jazeera.

Al Jazeera: You’ve undergone the most difficult experience of your life and have been separated for months from your family. Why did you first stop by the families of other prisoners before seeing your own, and how does it feel to be free again?

Khader Adnan: Every day we live through Prisoners’ Day and its special symbolism. I went to see the families of those imprisoned before seeing my own family as a token of appreciation for their support during my imprisonment and their enduring anguish at having loved ones behind the bars of the Israeli occupation.

My freedom is incomplete because of the prisoners who I’ve left behind. We salute all of the prisoners; Lina Jarbouni [the longest serving female prisoner], Sheikh Ahmad Hajj [the oldest prisoner on hunger strike], Omar Abu Shalalah, Jaafar Ezzedine, Hassan Safadi, and of course Thaer Halaleh and Bilal Thiab.

I was received by Bilal Thiab’s mother in [the nearby village of] Kufr RaI and relayed to her his message of endurance and commitment to his hunger strike.

After 66 days of refusing food, you spent 53 days recuperating. Did the treatment at the hands of the Israeli officers during your imprisonment improve after you ended your hunger strike?

No, not at all. Up until the last day in the prison hospital they would embark on ways to humiliate me, such as opening the door to stare at me whenever I would use the bathroom or shower.

When I was hunger striking, they would purposely eat and drink in front of me. They would insult me, call me a dog. One told me that they still haven’t done anything to me yet. Their manners are so unscrupulous.

They tried to provoke me by repeating that my wife was unfaithful to me, and that my daughters were not mine. What else could they do? They banned the media from covering my case, proof that they are afraid of the truth.

Even after I ended my hunger strike, as I was being transferred from the hospital in Safad to Ramleh, they did so in a way so that no one could see me.

They kidnapped me and pushed me through an inner garage. My appeal was held in the hospital cafeteria! Is Israel that afraid of showing its true face to the world?

How did you manage to find the resilience and strength in continuing your hunger strike, especially after the three times your family visited you?

[Hurried laugh] I don’t know how I did it. All strength comes from God, and when I began my hunger strike I knew that it would be until freedom or death … sometimes I am puzzled myself!

Israel granted permission for my family to see me not out of the goodness of their own hearts, but because they thought that the sight of my family would be enough to pressure me into eating again. It achieved the opposite effect, and I was further inspired to challenge my jailers.

Sixteen hundred Palestinian prisoners are on their third day of an open-ended hunger strike in Israeli jails demanding improved living conditions, including the right to family visits and the right to receive family photographs. Will this tactic succeed in translating a popular resistance movement outside of the prison walls amongst Palestinians?

My stance will always be with the prisoners, whether next to them, behind them, or in front of them. From the Gaza Strip to the West Bank to the ’48 territories and the exile, every Palestinian is obliged to stand united.

We are all the children of the same cause, and one people living under the same occupation. I saw so much support from our family in 1948 Palestine, from the Palestinian doctors and nurses, the Palestinians in Haifa, the school girls from Nazareth who wrote an assignment on me … I will never forget their love.

The mass hunger strike is a signal to all oppressed and vulnerable people everywhere, not just Palestinians. It’s a message to everyone suffering from injustice, under the boot of oppression. This method will be successful, God willing, and will achieve the rights of the prisoners.

I ask God to move the consciences of the free people around the world. I thank them all, especially Ireland, for they have stood by my hunger strike. I ask them to stand in solidarity with all the Palestinian prisoners on hunger strike in the past, present and future, with our tortured and oppressed people who live under the injustice of occupation day and night.

As the Palestinian prisoner to go on the longest hunger strike and survive, how does it feel becoming a symbol not just for Palestinian steadfastness but for resistance among other oppressed people?

During my days in the [Meir Ziv] hospital in Safad, occupied pre-partition Palestine, I was reminded of the holiness and the glory of this land. Being close to the resisting countries of Lebanon and Syria all gave me further incentive to defy the Israeli prison authorities, which I don’t recognise.

I have barely presented anything worth of value to the Palestinian cause. I work at a bakery and sell zaatar, and will continue to do so to remind every Palestinian that their roots are deeply entrenched in this land, among the olive trees and the zaatar.