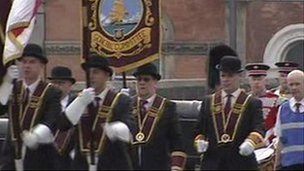 North Belfast residents have expressed anger that the Parades Commission has ruled on an upcoming Belfast parade despite ongoing dialogue with the Apprentice Boys.
The Apprentice Boys have now met with the Carrick Hill residents several times ahead of its Remembrance Day parade on Saturday in attempts to resolve tensions.

But on Tuesday, the Parades Commission ruled that the Apprentice Boys parade will be allowed to play only hymns for part of the route, from the junction of Donegall Street and Union Street.

Five bands and 400 participants will take part in the parade as it makes its way along Donegall Street and Clifton Street on the return journey.

Parade protestors have been limited to 150.

“The meetings with the Apprentice Boys were a constructive set of meetings,” Frank Dempsey, chair of Carrick Hill Concerned Residents’ Group said.

(We’re) bitterly, bitterly disappointed by the Parades Commission’s ruling, in so far as it undermines the dialogue we’ve been in with the Apprentice Boys.

Frank Dempsey
Jim Brownlee, Governor of Apprentice Boys Derry said Saturday’s march was an “annual Remembrance parade- causing no offence” and they were disappointed that people delt the need to protest.

“Although we reluctantly accept the determination…we hope the parade passes peacefully with its usual dignity and discipline as experienced in previous years in honouring our war dead.”

The Donegall Street area has become a flashpoint since trouble broke out during a Black Institution parade at the end of August.

The unrest occurred after a video showed a loyalist band playing an alleged sectarian song whilst circling outside St Patrick’s Catholic Church on 12 July, although the band denied the tune was sectarian.

Meanwhile, the latest parade to pass through the area ended without incident.

Four bands and approximately 400 people took part in the County Grand Orange Lodge parade to commemorate the anniversary of the Protestant Reformation on Sunday 28 October.