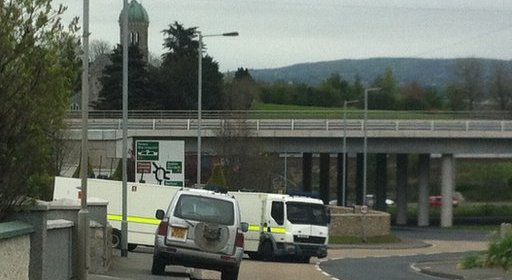 Bomb found in Newry ‘could have killed’ (BBC News Northern Ireland)
A bomb found in Newry, County Down, contained a significant amount of explosives that had the potential to kill, police have said.
The device was made safe by an Army bomb team. It was left near the Cloghogue roundabout close to the Forkhill turnoff in the city.
The A1 which runs between Belfast and Dublin was closed for a time in both directions while the bomb was examined.
It is not yet known what type of device it was.
Road closures in the area caused long tailbacks for much of Friday.
A sliproad on the north-bound lane of the A1 is expected to remain closed to traffic for much of Friday evening.