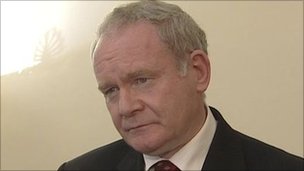 Sinn Fein deputy McGuinness ponders Queen meeting (Belfast Telegraph)
Martin McGuinness has sent out his strongest signal yet that he is willing to meet the Queen for the first time.
The Queen will visit Northern Ireland later this year as part of her Diamond Jubilee celebrations.
Last night, the former IRA leader said gestures made by the Queen on her first state visit to the Republic last May could not be ignored.
At the time Sinn Fein declined to attend a programme of functions organised as part of the historic royal visit to Ireland.
They included a dinner at Dublin Castle — where the Queen spoke a few words of Irish in her address to assembled delegates.
She also laid a wreath at Dublin’s Garden of Remembrance for the leaders of the 1916 Rising.
Traditionally Sinn Fein members stay away from events the monarch attends on visits to Northern Ireland.
However, last night, Mr McGuinness said the party would take stock before any decision is made.
The Deputy First Minister also spoke of his desire to represent everyone in Northern Ireland.